For nearly a century, Presidents of the United States have established unique and private relationships with their pollsters. There are very few people who have served in this capacity, as an advisor on public opinion. Presidential polling—the questions asked, the answers compiled, and the way in which that information is used in decision-making—paint an important picture of the history of American democracy.

It is in this spirit that the George Washington University’s Graduate School of Political Management created the Society of Presidential Pollsters to archive and further examine the role public opinion plays in shaping decision-making strategy in the White House.

Beyond events and archives, the ultimate role of the Society of Presidential Pollsters is to pay much-deserved tribute to an important group of advisors to presidents and presidential candidates over the years.

The Society was founded in 2010 thanks to a generous donation from Mark J. Penn, former pollster to President Bill Clinton. The Society works to locate and obtain records of the polling and related analysis done for the Oval Office. With the help of the libraries at GW, it preserves questionnaires, letters, and memorabilia in order to establish an academic resource for the study of presidential decision-making.

The Society aims to delineate the often-elusive role of the presidential pollster. By studying the records obtained, conducting independent research, and working with contemporary historians, it weaves a narrative of the position going back to the FDR administration.

The papers of President Bill Clinton’s pollster and the Society’s founder, Mark J. Penn, are the first to have been submitted to the archives and will be available for research in the near future. This collection includes the actual data in both hard copy cross-tabulations and in researchable electronic format as well as the memoranda and analysis provided to the President.

For more information about the Society of Presidential Pollsters contact Tracy Sullivan.

American Government in the 21st Century

“Liberty cannot be preserved without a general knowledge among the people…” - President John Adams.

"No experiment can be more interesting than that we are now trying, and which we trust will end in establishing the fact, that man may be governed by reason and truth.” - President Thomas Jefferson [Letter to John Tyler Washington (28 Jun 1804)]

The principal project of the Society of Presidential Pollsters – entitled American Government in the 21st Century – will be an annual assessment of how Americans evaluate the success of their national government.  Through public opinion research conducted by the firm HarrisX and analyzed by the nationally recognized pollster, Mark Penn, the project will inform journalists and scholars as to the knowledge held and the evaluations made by American citizens of their public institutions, the workings of American politics, and the functioning of the U.S. Constitution.

The American democracy is often described as a great experiment in popular sovereignty, continually in need of vigilance and tinkering so as to realize the Constitutional values of life, liberty, and the pursuit of happiness. The Preamble of the U.S. Constitution identifies six goals the document is intended to ensure: form a more perfect Union, establish Justice, insure domestic Tranquility, provide for the common defense, promote the general Welfare, and secure the Blessings of Liberty to ourselves and our Posterity. Establishing these values requires effective government institutions.

Recently, Americans have become increasingly divided by political disputes which tap into these core values.  Pursued with unbridled vigor, partisan polarization threatens to undermine the fragile customs and consensus that support our political institutions.  It is appropriate, therefore, that we step back and assess how deeply divided Americans are about the fundamental values of democracy itself and our democratic institutions.  To this end, the project will annually take the pulse of the American Experiment.

A virtual panel event with Mark Penn, Christopher Arterton - Director Emeritus of GSPM, and Dr. Lara Brown - Director of GSPM, was held discussing the year's assessment findings in October 2021. A full recording of the event can be viewed here.

Majority of Americans concerned that the country and the economy are on the wrong track. 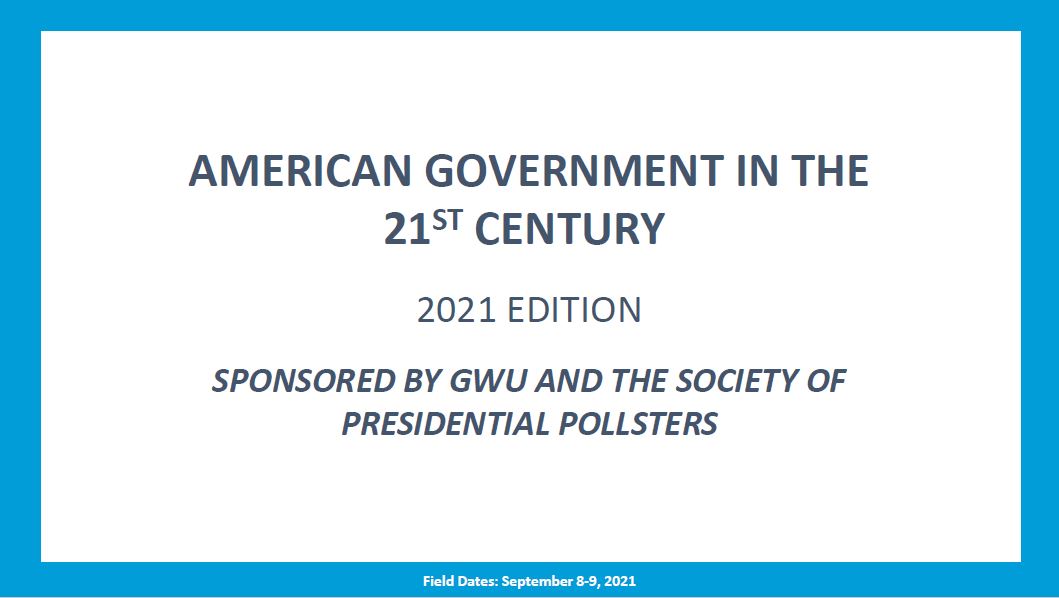 Press Release: New GW Poll Shows Most Americans Approve of Biden, Confident in Future of US

Americans less confident in the direction of the US economy and the country as a whole. 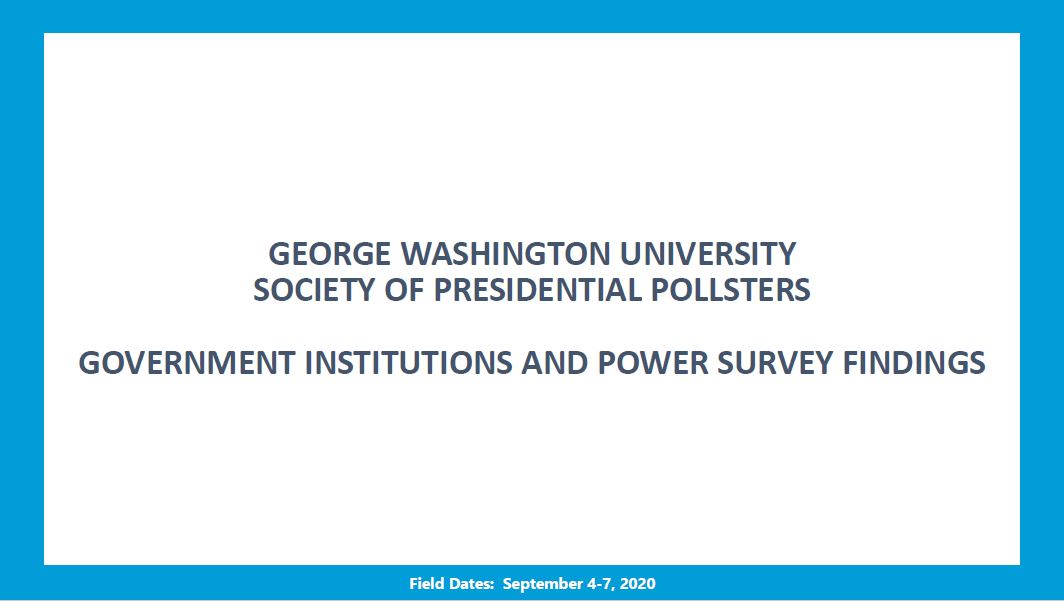 GW poll reveals majority of voters feel Congress and the presidency are not working institutions.