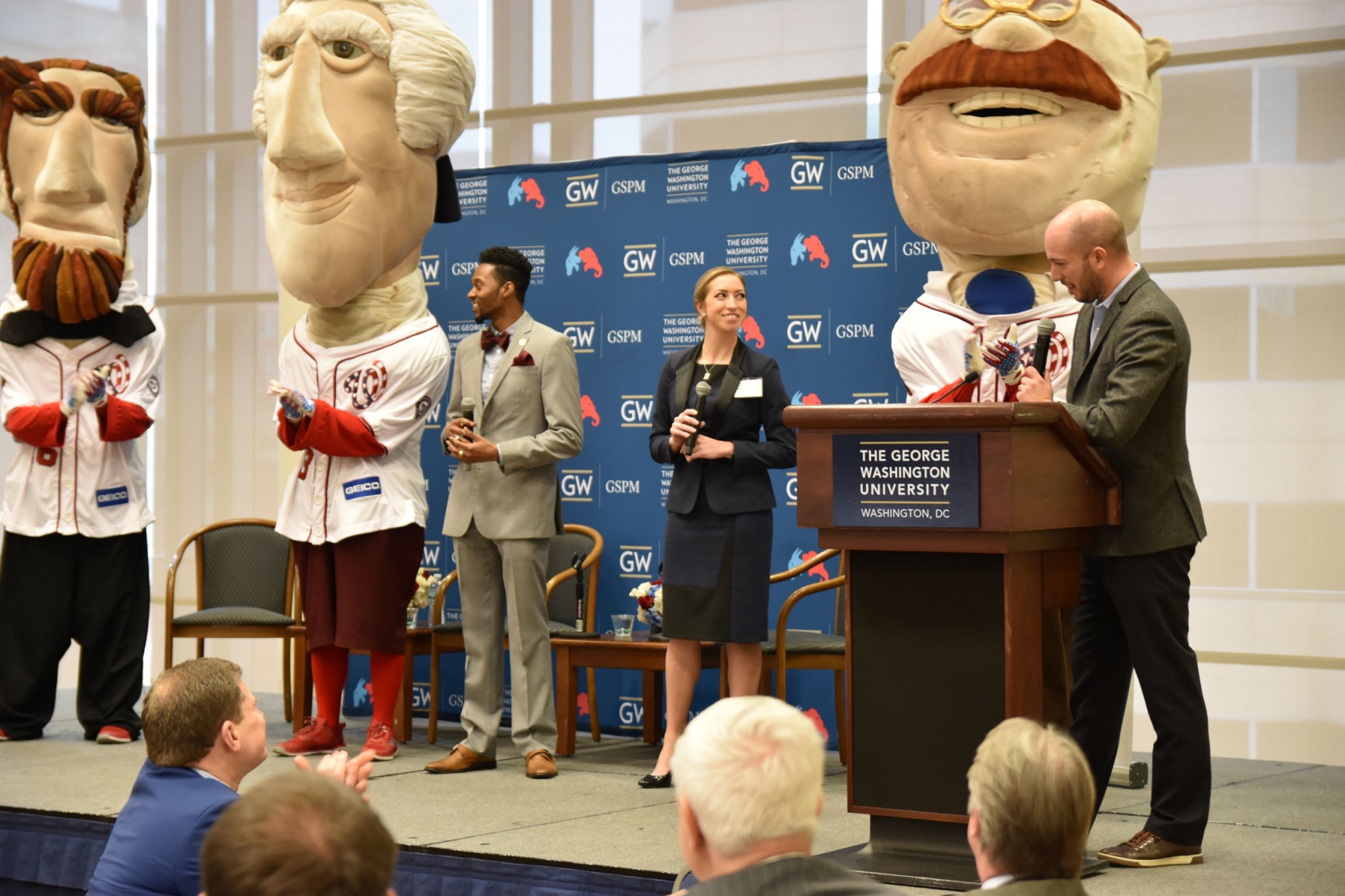 Technology has delivered us into an era that allows information to be accessed and shared like never before, yet America is fractured; the collision of opinions and unwillingness to compromise has led to finger-pointing and name-calling. The public is polarized, our politics are paralyzed, and too often the media serves to inflame rather than inform. On the national stage, opinion and optics trump experience and fact, and the players benefit more from conflict than compromise.

Reimagining Disruption, led by GW’s Graduate School of Political Management (GSPM), brought together former and current elected officials, political professionals, corporate executives, and academic thought-leaders to discuss the future of political communication. This two-day, knowledge-sharing symposium focused on the applicability of the latest tools, tactics, and techniques that have been used successfully in consumer marketing and advertising. It considered the consequences of a wide variety of political reforms that are promoted as solutions to polarization and gridlock.

Coverage of the #RD18 conference in GW Today.

Focusing on the themes of ethics and civility in politics, this prestigious event was established in 1999 by Brian O’Dwyer, BA ’66, LLM ’76, who endowed the lecture in memory of his father, Paul O’Dwyer. The elder Mr. O’Dwyer was a principled attorney and political leader who was a member of the New York City Council, including serving as its president. Over the years, distinguished individuals including Maria Cino, former U.S. cabinet official, Luis Fortuna, former governor of Puerto Rico, and Stephanie Schriock, MA ’97 and president of EMILY’s List, have participated in the O’Dwyer Lecture, which is attended by several hundred students, faculty, and alumni.

This year’s event was entitled “Generational Political Leadership: The Ethics of Commitment,” and explored what it means to commit to service as a public official and the role of politics in our democracy. Join speakers, REPRESENTATIVE CONNIE MACK IV and KATHLEEN KENNEDY TOWNSEND, as they discuss how family legacy and political leadership intersect.

Our opening event on Thursday looked to find inspriation for the future of politics from the world of sports from two individuals who achieved success in both. Former U.S. Reps. HEATH SHULER and TOM MCMILLEN lead their teams to victories on the field, and later experienced solo success at the ballot box. Our moderator, CBS News Chief White House Correspondent MAJOR GARRETT, gets their insights on how to restore sportsmanship to politics.

Prior to our panel discussion, our guests received some inspiration from some very special guests.

The Frank J. Fahrenkopf and Charles T. Manatt Lecture "Making the Senate Work-How Can it Be Done?"

The Charles T. Manatt & Frank J. Fahrenkopf Salon is an opportunity to have an honest, enlightened discussion with individuals of many political persuasions. The Salon consists of lively conversation of a major political issue from varying viewpoints and those attending are encouraged to share ideas and offer solutions. Individuals who have participated in the past range from former and current elected officials, political consultants, corporate executives, and academic thought-leaders.

This year’s salon lunch will feature former SENATOR TRENT LOTT,  former SENATOR TOM DASCHLE, former SENATOR MARY LANDRIEU, and former SENATOR OLYMPIA SNOWE. They will offer their perspectives on the current state of the U.S. Senate and how members can work across the aisle. This panel will be moderated by BILL PRESS, Talk Show Host & former Executive Director of the California Democratic Party.

The Richard W. Blackburn Endowed Lecture on Civility and Integrity “Changing the Conversation- What Does the Future Look Like and How Do We Improve the Tone of Public Discourse”

This prestigious event, now in its fifth year, was established through a generous gift from Richard W. Blackburn, J.D. ’67 and GW trustee emeritus. This event honors the spirit of integrity exemplified by George Washington’s Rules of Civility and Decent Behavior in Company and Conversation, a guide to honorable character developed by our nation’s first president. It also serves as a signature capstone for the GW School of Business’s First Year Development Program, a curriculum for undergraduate students that focuses on academic integrity, ethics, communication, leadership, and career development.

Over the years, esteemed individuals including New York Times columnist David Brooks, Harvard philosopher and author Michael Sandel, and Noah Feldman—one of Esquire magazine’s “75 most influential people of the 21st century” and “one of the stars of his generation” according to Supreme Court Justice Elena Kagan—have delivered the Blackburn Lecture.

This year’s lecture, “Changing the Conversation: What Does the Future Look Like and How Do We Improve the Tone of Public Discourse” will be delivered by MARK PENN, The President and Managing Partner of The Stagwell Group, MITCH SEMEL, Founder of Semel Media, and CHARLOTTE BLANK, Chief Behavioral Officer at Maritz. The panel will be moderated by GSPM Director, DR. LARA M. BROWN.

In addition to our main panel discussions, Reimagining Disruption featured a host of breakout panel discussions covering a host of issues in the fields of politics, communications, and advocacy. A list of sessions and panelists is below.